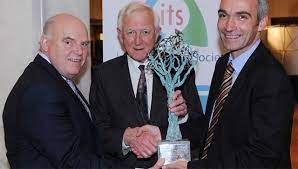 Professor Pat Finnegan, Professor Emeritus, and previous Dean of Medicine at the National University of Ireland Galway (NUIG) and retired respiratory Consultant at University College Hospital Galway, was presented with the Irish Thoracic Society Award for Outstanding Contribution to Respiratory Medicine at the Society’s Annual Gala Dinner on the 7 November 2014.

A graduate of University College Galway (now NUIG) Professor Finnegan spent the early stages of his career in Birmingham. Where he was involved in seminal work in the development of long-term oxygen therapy which included use of the first prototype concentrator in the early 1970s. The safe prescription of oxygen therapy, nowadays taken for granted, owes much to those ground breaking advances.

On his return to Galway in 1976 Prof Finnegan applied his skills to the management of patients across the spectrum of respiratory disease. He was a pioneer in the development of non-invasive ventilation, and developed the first home-based NIV programme in Ireland, predating similar programmes elsewhere.

As lecturer, then Professor and later Dean, Professor Finnegan has contributed enormously to the development of the Medical School in Galway. Under his direction the Faculty expanded to embrace Nursing and the Allied Health Professions. Prof Finnegan is widely regarded for his role as teacher and mentor to generations of Irish medical graduates.

Prof Finnegan was a key figure in the development of the Irish Thoracic Society. In 1985, when the Society evolved from what was previously the Irish Tuberculosis and Thoracic Society and joined forces with members of the Ulster Thoracic Society to become an all-island body, Professor Finnegan was elected as its first President. Prof Finnegan’s retirement has been no less productive. He is currently completing his third book while two of his titles, The Case of the Craughwell Prisoners during the Land War in Co Galway, 1879–85 and Loughrea, That Den of Infamy, the Land War in Co Galway 1878–82 were bestsellers in their genre.