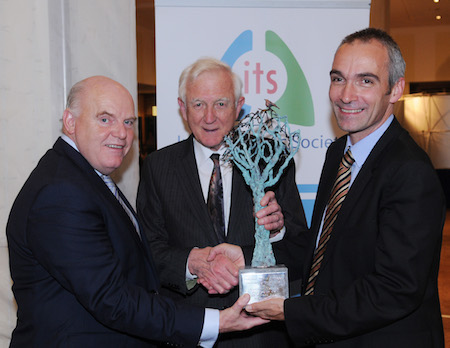 On presenting the award, friend and colleague Prof JJ Gilmartin paid tribute to Prof Finnegan and outlined the highlights of a career marked by outstanding achievements as both teacher and innovator.

A graduate of University College Galway (now NUIG) Professor Finnegan spent the early stages of his career in Birmingham. Here he was involved in seminal work in the development of long term oxygen therapy which included use of the first prototype concentrator in the early 1970s. The safe prescription of oxygen therapy, nowadays taken for granted, owes much to those ground-breaking advances.

On his return to Galway in 1976 Prof Finnegan applied his skills to the management of patients across the spectrum of respiratory disease. He was a pioneer in the development of non-invasive ventilation, and indeed developed the first home-based NIV programme in Ireland. Prof Finnegan’s vision for and commitment to his patients and to respiratory medicine in Ireland is well illustrated by his extraordinary efforts in obtaining this novel and life saving treatment. It was not until the new millenium that such programmes became common place around the world.

As lecturer, then Professor and later Dean he has contributed enormously to the development of the Medical School in Galway. Under his direction the Faculty expanded to embrace Nursing and the Allied Health Professions. As a teacher to generations of Irish graduates, particularly from UCG, his reputation is legendary. His teaching style is epitomised by his hallmark – the bedside tutorial – and as a mentor he was known for being generous with his time and for his astute advice.

Prof Finnegan’s retirement has been no less productive albeit in the sphere of history rather than medicine. He is currently completing his third book. The first two entitled ‘The case of the Craughwell Prisoners during the Land War in Co. Galway, 1879–85’ and ‘Loughrea; That Den of Infamy, the Land War in Co Galway 1878-82’ were bestsellers in their genre. They are based around incidents during the Land War in East Galway including a grave miscarriage of justice which saw the wrongful conviction for murder of the author’s grandfather, Patrick Finnegan.

There was a great attendance at the award ceremony to honour Prof Finnegan, and it was a true honour for the ITS to recognise the career and commitment of one of our most emminent physicians in the area of respiratory medicine.